Baptism with standing ovation for the SUMMA Foundation 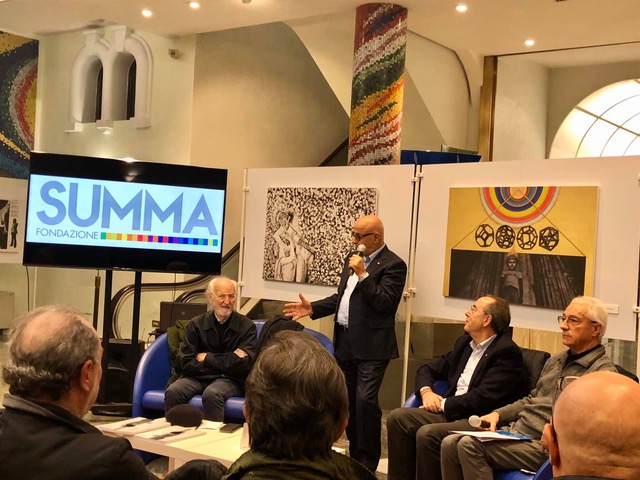 The newly founded Summa Foundation, entitled and chaired by the master Franco Summa, was baptized on Sunday 17 November in Pescara at the Maison des Arts of the Pescarabruzzo Foundation.17

Exciting speech by the master from Pescara, who illustrated the mission of the foundation, which is to affirm and promote the quality of living places and urban spaces. Mission to which he dedicated, together with his wife and virtual co-founder of the Foundation, Adina Riga (1954-2013), his entire artistic career, undertaken in the mid-1960s, building urban art works such as ‘Parameters of encounters’ in 1971 in Penne, ‘A rainbow at the end of the street’ in 1975 in Città Sant’Angelo, ‘Words live in reality things in mind’ in 1976 in Castel di Sangro, the 1993 ‘Porta del Mare’ in Pescara, up to the most recent installations such as ‘Love, Design, Exist’ in 2009 in Bolognano and the ‘Enchanted Garden’ in 2018 in Pescara. Master Summa thanked the City of Pescara and the numerous guests who participated in the ceremony, the Vice-Presidents Ottorino La Rocca and Giuseppe Pace, the Councilors for Culture of the Municipality of Pescara and Montesilvano, Dr. Spada who spoke on behalf of the Superintendent of Fine Arts of Abruzzo and the landlord prof. Mattoscio who moderated the meeting. There was a lot of emotion among those present, which resulted in a long standing ovation, followed by the heartfelt words of the artist who donated his works and his house-museum to the Foundation which bears his name and has the task of continuing and expanding the work of dissemination of the ‘City of Summa’, which is not only a physical place but above all a fulcrum of historical, cultural and symbolic tradition. During the event, a video was presented, curated by the Delloiacono Comunica agency, directed by Dino Viani, a tribute to the newly formed SUMMA Foundation, which portrayed the master in his House Museum surrounded by his paintings and more. Below is the link to view it. By the end of the year, the Summa Foundation will disseminate the activity program, in collaboration with the Superintendence of Archeology, Fine Arts and Landscape of Abruzzo, scheduled for 2020: guided tours for schools of different grades, study and research seminars aimed at forming a widespread awareness of the fundamental role of art in raising the quality of life.