ART AND BUSINESS: THE FORECOURT OF THE ABRUZZESE HEADQUARTER OF MULTINATIONAL COMPANY VALAGRO LIGHTS UP WITH COLORS THANKS TO MAESTRO FRANCO SUMMA’S FUTURIST EDEN 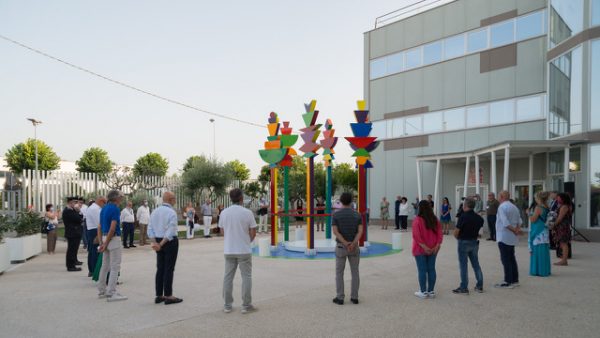 On July 28, the forecourt of Valagro company’s seat in Atessa saw the opening of Franco Summa’s Eden futurista (Futurist Eden),an installation planned since 2015 to lend a monumental policromy to the square, through a permanent and clear sign of the reality in which the firm operates.

The president of Fondazione Summa, Ottorino La Rocca, said that this idea was conceived during one of the many visits that the artist paid to the company. The genesis of this artwork lies in the intention both of qualifying an area that couldn’t find a definition before, and of creating a symbol of the company’s aim and ideal: innovative solutions for plant care, ensuring a lower environmental impact of agriculture and high quality crop productivity. Eden futurista consists of six enameled stainless steal elements, about four meters tall and arranged as to form a circular perimeter; each one of them is composed by a shaft and an ending at the top that recalls plant forms, a colorful nature projected into the future.

As highlighted by Valagro’s AD Giuseppe Natale, “over the years, not only did the company shape up as the place of production and competition, but also as a welcoming and caring place for the employees”. On the basis of this idea, Franco Summa’s oeuvre represents the will to prepare a cozy space too, in which the creation of value can be triggered by a circle of positive energy that originates in the team and attains customer satisfaction. During the opening, the representative of the Superintendency of Chieti and Pescara, Giuseppe La Strada affirmed the importance of such an operation in the Abruzzese context. The company has indeed managed to give a strong sign to an area that is more and more showing the urgent will to promote contemporary art, in a perspective of citizen participation to and awareness of the heritage of all the artists that, like Franco Summa, have been performing in our region. Thanks to Fondazione Summa, established according to the artist’s wish, his artworks are scattered all over the region territory, giving everyone the possibility to enjoy it.

The vice president of Fondazione Summa, Giovanni Tavano highlighted how the maestro’s work is important for a social dimension of art, a concept inherent his philosophy, which is tangibly represented by the urban art manifestations realized along the way. According to master Summa, people should be taught beauty, and for this reason he has always been detached from the concept of a private, indoor art-object, proposing instead actions able to talk to the space around, and to qualify it from an aesthetical point of view, as for Eden Futurista. Franco Summa stands apart from his generation exactly for what he chooses to reach with his art: the representation of thought, of contents, and at the same time the manifestation of harmony, that recalls the concept of beauty as a primordial value at the base of all western art.

Gabriella Tricca, host of the event and youthful friend of the artist said that the emblem of Franco Summa’s personality in his work is his direct and intuitive significance; she then involved the audience in a reflection/meditation upon the meaning and the nature of color as used by the master.

From today on, the Futurist Eden will stand out among the light volumes of the industrial complex, with its vivid tones and plastic shapes that evoke a concept of prosperity beyond time, in perfect harmony with the inclusive project named Summa Ars, that involves architecture, painting, sculpture and urban planning together with other art disciplines and design. An art that breaks into life to structure its different aspects building “a higher level of awareness of being in this world”. This awareness allows both the individual and the company to get over temporal dimension and get in the dimension of inhabiting, gifting a space recognizability, perspectives and memories, to keep creating values. 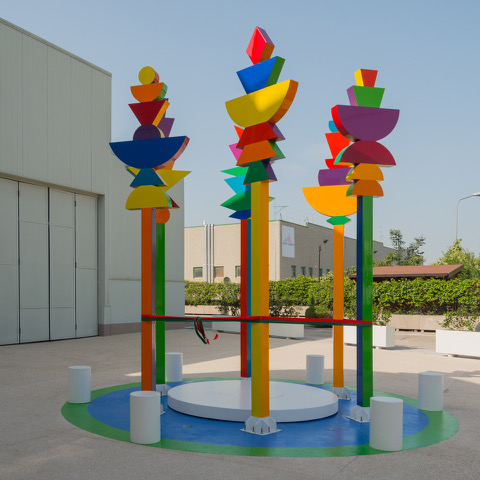